Use of poison-baits in the countryside is one of the most widely used predator eradication methods worldwide (Márquez, et al. 2012) and is a significant threat to biodiversity in the European Union. Poison is used to kill wildlife considered to be harmful to certain activities, in particular game management for hunting, livestock farming and other agricultural practices (Graham, et al. 2005; Sotherton, et al. 2009). Illegal use of poison is considered one of the most important issues regarding illegal killing of birds due to the serious conservation impacts (Margalida, et al. 2008; BirdLife, 2011) and is confirmed to be among the most important direct threats in Europe to the Spanish Imperial Eagle (Aquila adalberti), Eastern imperial eagle (Aquila heliaca), Red kite (Milvus milvus), and Egyptian vulture (Neophron percnopterus). Poison-baits have been identified, for example, as the primary limiting factor in the expansion of the reintroduced population of Red kites in northern Scotland (Smart et al. 2010) and of the UK Golden eagle (Aquila chrysaetos) population (Whitfield et al. 2008). In addition, poison- baits suppose a serious impacts on carnivore mammals (Virgós & Travaini 2005), by causing population decline and/or regional/national extinction of some species of bears, lynxes, wolves, mustelids or wild cats (Council of Europe 1993; Breitenmosser 1998; Lozano & Malo 2012; Ripple et al. 2014). Indiscriminate use of poison-baits also presents a risk to other wildlife, working animals (shepherd and hunting dogs), pets and human health, with potentially lethal consequences.

Very large numbers of birds are killed annually as a result of deliberate misuse or otherwise illegal use of poisons (Brochet et al.2015; Bodega Zugasti, D 2014; Birdcrime, RSPB). This unnecessary mortality can severely affect the conservation status of vulnerable species, including species protected under national, EU and wider international law. A transboundary approach at EU level is needed to address this problem in the case of migratory species.

Use of poison-baits commonly involves lacing a food item in a toxic substance, normally phytosanitary products like insecticides, rodenticides, fungicides, herbicides or molluscicides (snail and slug pellets). The prepared bait is left in a spot accessible to the target animals and often to other non-target species, which may also be affected. Deliberate poisoning is therefore a large-scale, non-selective and destructive method of control that has a huge knock- on effect on non-target species; it may even pose risks to human health.

Illegal poisoning can involve legal everyday compounds which are used in an illegal manner, as well as substances which are illegal (e.g. Carbofuran or Aldicarb). The most common substances used in poison-baits are insecticides and, to a lesser extent, rodenticides, usually those that are known as highly toxic by users. Carbamate insecticides, such as carbofuran and aldicarb, are often used in poison-baits for predator control in numerous areas around the world. For example, in Spain, between 2005 and 2010, 50 % of cases of poisoning were caused by aldicarb and 22% of them by carbofuran (Bodega Zugasti, 2012). In Hungary carbofuran was detected in 85% of the 476 birds found poisoned by baits to illegally control predators between 2000 and 2015. The other commonly detected chemicals in this country were terbufos (9%) and phorate (7%) (BirdCrime database of MME BirdLife Hungary).

Finally, many of the Species Action Plans (around 50 bird species) developed by BirdLife International and funded by the EU, recognises poisoning as a threat and recommended anti- poisoning actions in most of the plans for raptors (e.g. both imperial eagles, all vultures or red kites). 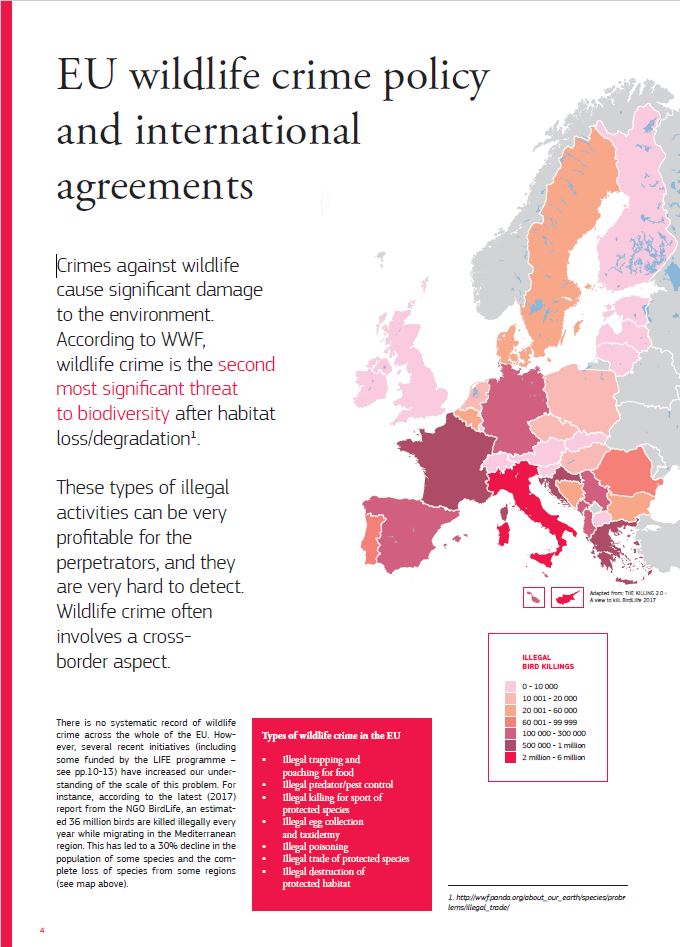